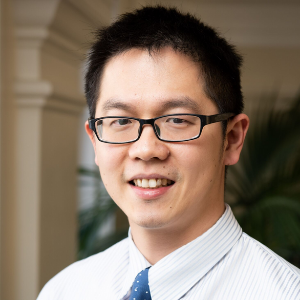 Dr. Lin is a Pharmacoepidemiologist in the Division of Pharmacoepidemiology and Pharmacoeconomics at the Brigham and Women’s Hospital and a practicing hospitalist at the Massachusetts General Hospital. He is an Assistant Professor at Harvard Medical school and the Executive Director of the Mass General Brigham (MGB) Center for Integrated Healthcare Data Research. In this role, he has built a highly valuable research database, linking multiple health insurance claims data with a variety of clinical data from electronic health records of the MGB institutions. Leading a team of investigators, research scientists, and administrators, he has built an efficient infrastructure that makes these rich data sources readily available for researchers at Harvard Medical School to facilitate scientific discovery. This valuable database has led to multiple publications in high-impact journals and successfully competed NIH research grants. He is also the Director of the Program of Optimal and Safe Prescribing in the Elderly (PROSPER) with the mission to generate high-quality comparative safety and effectiveness real-world evidence for personalized prescribing and deprescribing in older adults. His research has focused on optimal prescribing in vulnerable populations using large routine-care databases and the development of analytical solutions to combat common biases in pharmacoepidemiology. As Principal Investigator (PI) of an NIH-funded R01 research project (1R01LM012594), he has developed and validated an algorithm to identify a high data-completeness cohort to reduce the information bias resulted from missing medical information recorded outside of the study electronic health record (EHR) system and demonstrated this sub-cohort is representative of the remaining population. He is also the PI of an NIH-funded research project (1RF1AG063381, originally 1R01AG063381) aiming to determine the optimal anticoagulation strategy to prevent stroke in older adults with dementia and other high-risk features. He has developed and validated the best-performed prediction score for anticoagulation quality, which can help reduce inappropriate prescribing of warfarin, a highly morbid anticoagulant, to patients susceptible for adverse outcomes. In addition, he is PI of an NIH-funded Ro1 project (1R01LM013204) to develop a data-adaptive analytical framework for reducing confounding bias in studies that leverages a large amount of patient information recorded in the free-text clinical notes and reports for confounding adjustment in comparative effectiveness research (CER). He has published extensively in pharmacoepidemiology methods to minimize common biases and robust CER findings using real-world data. Using a population-based electronic medical record database in the UK, he was among the first investigators who quantified the effectiveness of different gastroprotective strategies among patients on various antithrombotic therapies. He has also published novel methods to improve information bias and confounding adjustment for multi-center survey-based epidemiological studies and produced important evidence to inform the safe use of antibiotics during pregnancy. His long-term career goal is to establish a rigorous and generalizable framework to optimize validity and precision of comparative effectiveness research with detailed evaluation of treatment effect heterogeneity using electronic health records and insurance claims data.